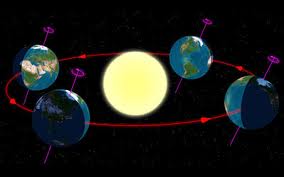 For millennia, cultures around the world continue to celebrate some type of winter holiday, usually around the time of the winter solstice in the Northern hemisphere (for the sake of argument this article assumes the reader is in the Northern Hemisphere, however the same celebrations take place in the Southern hemisphere during the summer solstice).

Usually the winter solstice occurs on the first day of winter, December 21, which marks the shortest day of the year due to the least amount of daylight.

While the ancient people did not have instruments to measure daylight, they noticed a shift in the path of the sun, and found comfort in the fact that the days became longer again after the solstice. Many holiday celebrations began around December 25, a few days after the solstice, because it took a few days to notice the shift.

The three most common winter holidays are Christmas, Hanukkah, and Kwanzaa, but other holiday celebrations occur during this time as well.

While Christmas is a huge commercial holiday by today’s standards, millions and millions of people worldwide celebrate it as both a religious and secular holiday.

People from all around the world are familiar with the images now associated with Christmas. But what were the true origins of this holiday? Many of the images and rituals Christians associate with Christmas actually began with the pagans, much like many other holidays. The tradition of a Christmas tree began when the pagan people brought a tree into the house for the wood spirits to live in and keeThe origins of Christmas goes back several centuries before what Christians consider as the birth of Jesus Christ, with the earliest records of winter celebrations indicating that the pagans in Northern Europe began the celebration with Yule. The men of the villages went into the forest to find the largest logs to burn on December 21, the winter solstice. The village then feasted and celebrated until the log burned out, which sometimes took up to 12 days. They also honored the return of spring with things symbolic of fertility.

p warm; they left treats for the spirits, and hung bells on the tree so the family knew when the spirits were in the tree. They topped the tree with the five-pointed star, the pentagram, which symbolized the five sacred elements of the pagan beliefs.

The Roman Catholic Church did not begin celebrating the birth of Jesus as a holiday until the 4th Century A.D. Until that time, the only holiday the church recognized was Easter. However, there is no reference of the birthday of Jesus in the Bible, which is a fact that the Puritans later pointed to as a justification for criminalizing the celebration of Christmas in the American Colonies. In an effort to make the Christmas holiday more acceptable to the population, they began celebrating it at the same time as the centuries old winter solstice.

Each year, a beggar, crowned the “lord of misrule,” led the poor to visit the homes of the rich, and demand their best food and drink. The rich would either comply or be subjected to harassment from the horde. This came to symbolize the season of the year when the rich repaid their “debt” to society, whether real or imagined, which continues today in the tradition of donating to those less fortunate.

Until 1681, the Puritans outlawed Christmas in Boston, with a fine of five schillings imposed on anyone found to have the Christmas spirit. In contrast, Captain John Smith reported that the people enjoyed the first Christmas celebration at the Jamestown settlement, and no problems occurred during the celebration.

The revival of Christmas as a popular celebration happened with the help of two authors in the early 19th Century, when Washington Irving and Charles Dickens penned the books, The Sketchbook of Geoffrey Crayon, gent, and A Christmas Carol respectively. These stories came at the right time as attitudes toward charity and generosity were changing. Hanukkah — Carrying off the Menorah from the temple in Jerusalem

Hanukkah, or the “Festival of Light,” is the Jewish holiday that celebrates the re-dedication of the Holy Temple in Jerusalem after its recovery from the Hellenist Syrians in

165 B.C. The word Hanukkah translates to “dedication” in Hebrew, and it celebrates the miracle that occurred at the temple.According to the Jewish faith, when the Jews re-claimed the temple, Judah Maccabee and his troops found the temple in terrible shape from the havoc created by the invading Greek Syrians.

After cleaning and repairing the temple, the Maccabees tried to light the Menorah, a sacred seven-branched candelabrum, but found that there was only enough oil to light the lamp for one night.

Miraculously, the lamp remained lit for eight days, which allowed them the time they needed to find more oil.

Hanukkah celebrates this miracle; it is a time when families exchange gifts, play games, feast on traditional kosher meals, light a new candle on the menorah each night, and recite ritual prayers.

Kwanzaa is a relatively new winter holiday. Created in 1966 following the Watts riots in Los Angeles, Dr. Maulana Karenga, a professor at California State University, Long Beach, founded this tradition as a way to bring African-Americans together, based on the “first fruit” celebration, the traditional harvest celebration of the Ashanti, and Zulu people in Africa.

Each of the seven nights of Kwanzaa begins with the lighting of a different color candle that symbolizes the seven principles of Kwanzaa, called Nguzo Saba in Swahili. Families gather together to discuss the meaning of the principles.

Unity, or Umoja, is the first principle of Kwanzaa; it teaches family unity, and community, which includes the lighting of a black center candle on December 26.

One of three red candles placed to the left of the black center candle in the kinara, similar to the Jewish menorah, symbolizes the next principle, Self-determination, or Kujichagulia, which teaches the value of creating one’s own path.

Ujima, or Collective Work, the third principle, teaches people that by working together, everyone can solve their problems; symbolized by one of the three green candles to the right of the black candle in the kinara.

Ujamaa means cooperative economics, and encourages followers to support themselves and their community with their own businesses; symbolized by the second red candle.

The second green candle represents, Nia, which means purpose, a principle designed to help members focus their efforts on building and strengthening their community. Symbolized by the final red candle is the principle of Creativity, or Kuumba, it encourages followers to use whatever means at their disposal to leave their community in better condition than when they inherited it. The final green candle symbolizes Faith, or Imani, and directs people to believe in their family, friends, and leaders to ensure that one day they might overcome their struggles.The seven symbols of Kwanzaa include, Mazao (crops), Mkeka (placemat), Vibunzi (ear of corn), Mishumaa Saba, (seven candles), Kinara (candleholder), Kikombe Cha Umoja (Unity Cup), and the Zawadi (gifts).

There are other holiday celebrations held by other faiths around the winter solstice as well.

Depending on the Islamic Lunar calendar, Muslims celebrate Ramadan during the winter holiday season, however in 2010, Ramadan fell during the end of summer and lasted into the beginning of fall.

This month long tradition calls for Muslims to fast during the day, care for the poor and perform extra prayers to cleanse themselves of the previous year’s sins. The Buddhists rejoice the day that Buddha achieved enlightenment on December 8, or the Sunday immediately before. Druids honor the ancient winter solstice festivals of long ago. Atheists also observe the winter solstice, however not for spiritual reasons, instead as a way to commemorate the previous year.This article only addresses the major winter celebrations. Take some time this Holiday Season to learn of others and what they are, what they celebrate.

The time of the winter solstice is sacred to many people for different reasons. It is clear that not everyone has to have the same beliefs in order to rejoice during the holiday season. It is a time to embrace the holiday spirit, share it with family, friends, neighbors, as well as create new traditions that include other people, races, cultures, and ethnicities.

USAonRace.com and RaceReport wish everyone a Happy Holiday, Merry Christmas, Happy Hanukkah, and a Joyous Kwanzaa and we look forward to better understanding other winter celebration as we better understand our world.|